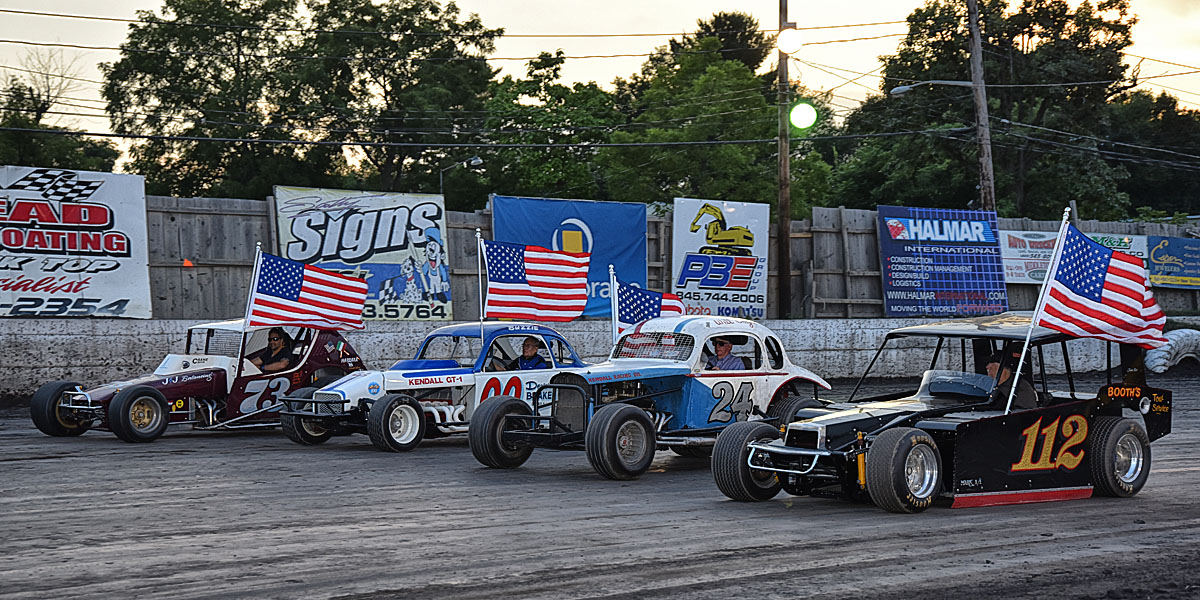 OAKS, PA January 8, 2020 . . . It has been the tradition of the PPB Motorsports Show to feature an annual exhibit heralding the glory of race tracks that are no longer active.

At PPB Motorsports 2020, the Sammons family has broken with tradition by featuring a speedway that has a rich tradition, but it is still going full speed ahead – Orange County Fair Speedway in Middletown, NY.

The fairgrounds oval first hosted an auto race at its 1919 Orange County Fair, won by Katonah, NY driver Jim Benedict driving a Duesenberg that ran previously in the Indianapolis 500.

The first Stock Car race was run on September 18, 1948 and was won by well-known regional hot shot Rocky DiNatale of Trenton, NJ.

Beginning in 1950, Orange County began hosting ‘Stock Car’ races. The racing proved to be so incredibly popular in Middletown (as elsewhere) that Stocks became the principal class, though Midgets and Sprints were still included.

As racing evolved at Orange County, one man, Frankie Schneider, took charge. He was one of the first to make a living racing Stock Cars and by the end of his career, had won 58 Modified features, the last in 1972. Nearly half a century later, Schneider’s standard has been eclipsed by only one man.

That man is Brett Hearn, who came to OCFS as a teenage rookie in 1975. In the years that have followed, Hearn rewrote the record book from cover to cover, winning more Modified features, more Small Block Modified features, and more track championships – by far – than any other driver.

Hearn, who returned to OCFS this past season and won yet another Modified championship, has recently assumed a key position with Orange Motorsports Entertainment, the entity that was formed when Halmar International’s Chris Larsen became involved with the speedway three years ago.

The OCFS Motorsports Show display will serve as the opportunity for drivers, owners, fans and media to dialogue with Hearn, who has scaled back his 45-year driving career to assume the reigns at Orange County.

All of the elements of OCFS, its century of racing history, the evolution of its classes, the depth of its on-track talent, along with priceless artifacts and historic racing machinery will be part of the Orange County Fair Speedway display at this year’s PPB Motorsports Racecar and Trade Show.

The development of OCFS’s nostalgic sentiment is due to the efforts of Middletowner Doug Dulgarian, who watched the races at the speedway as a youth, became a Sportsman driver when he was old enough, and continued to spectate at the track when his driving career ended. Dulgarian is bringing together historic race cars, Stock Cars and Open Cockpit cars alike, artifacts such as trophies, vintage driver attire, programs, and hundreds of photos spanning the 100 years of operation.

The focal event at the Orange County Fair Speedway display will be the once-in-a-lifetime autograph signing session that will take place from 3:00 PM to 4:00 PM on Saturday afternoon.

Past favorites Gary Balough, Tighe Scott, Leroy Amy and Anthony Ferraiuolo, IV will put pen to paper for fans at the Saturday signing session as well. Many more drivers and car owners are expected to be signing at the Motorsports Show.

While drivers will be meeting and greeting fans as a group on Saturday, many of the legendary cars they drove at Orange County will be on display from the time the show opens Friday until it closes Sunday.

Featured will be the No. 20 Big Block Modified driven to the 2019 championship by Brett Hearn, the Behrent’s No. 3 driven by Mat Williamson to the Centennial $100,000-to-win race last August, the Halmar No. 44 Stewart Friesen won the Eastern States 200 from last starting spot with, Grant Hilfiger’s 2019 Sportsman championship-winning No. 78, and Sportsman rookie Cody Higbie’s No. 97Jr. Sportsman car.

Vintage cars that will be in the Orange County Fair Speedway display are the No. 112 Gary Balough 1980 Syracuse winner, the No. 73 Balough 1979 Eastern States 200 winner, two of the late Frankie Schneider’s most famous cars, his Grant King car owned by Skip Tetz and his Coach car owned by Rusty Smith, and a recently completed restored Statewide No. 3 Weld car driven by Jimmy Horton.

The three day show, January 17-19, takes place at the Greater Philadelphia Expo Center in Oaks, PA and offers just about everything imaginable in motorsports. For more information check in at aarn.com.