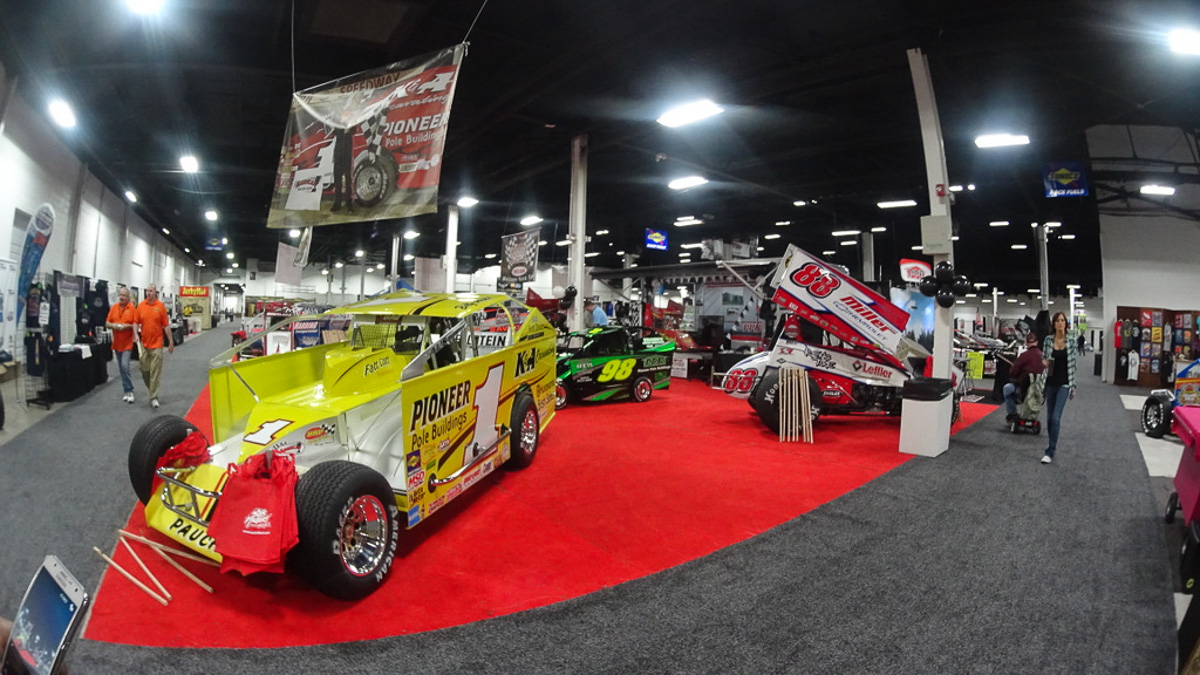 As of Thursday aftenoon, a little over twenty hours before the Show’s doors open to the public at 2:00 PM Friday, an estimated 75% of the more than 150 commercial exhibitors and a like percentage of the 250 race cars registered for the Show were in the building.

“The weather is good for move-in day and we’re seeing more and more of our exhibitors arriving earlier than usual,” Len Sammons, show organizer, said. “And with very nice weather forecast for the three days of the show, we are expecting very good crowds.”

At the lavish Pioneer Pole Building Display, PPB staff was vacuuming the carpet its booth, after having placed the Modifies of Billy Pauch, Sr., and Craig Von Dohren and several others.

Preparations were in high gear at the Behrent’s Performance Warehouse booth were Jeff Behrent, Jeff Heotzler and others were pricing fire suits, helmets and related personal safety equipment. Behrent’s is among many exhibitors that have been in all 33 previous Motorsports Shows.

Booth building was also proceeding at a rapid pace Thursday afternoon at the Bridgeport Speedway display, the New Egypt booth, the Lincoln Speedway exhibit and dozens of others.

The 34th PPB Motorsports Race Car & Trade Show officially opens Friday, January 19 at 2:00 PM. Featured Friday, beginning at 7:00 PM, is a racing themed reprise of television’s The Tonight Show, starring Dino Oberto, and featuring reflections of the Pine Brook Speedway, which raced from 1962 through the late eighties before it closed.

PPB Motorsports runs from 11:00 AM to 9:00 PM Saturday, January 20. The full day will be highlighted by the personal appearances of three time NASCAR Sprint Cup Champion Tony Stewart, who will sign autographs from 12:00 Noon through 2:00 PM. Also making an appearance will be former NASCAR Crew Chief and current on air personality Larry McReyolds, and The King, Steve Kinser, the all time World of Outlaws Sprint Car champion.

Top northeastern race winners will appear throughout the day to sign autographs. And a gallery of former stars from Pine Brook Speedway will be on hand to swap stories with one another and with fans.

The festivities heat up beginning at 7:30 PM with the staging of the annual Ms. Motorsports Pageant, sponsored by Oliver Construction. Ms. Motorsports 2017, Taylor Albert will crown her successor at the end of the always well-attended event.

The Show’s third and final day, Sunday, January 21, is dedicated to the younger race fans, featuring the Little Ms. Motorsports pageant and Kids Big Wheel Races. Doors on Sunday swing open at 11:00 AM.