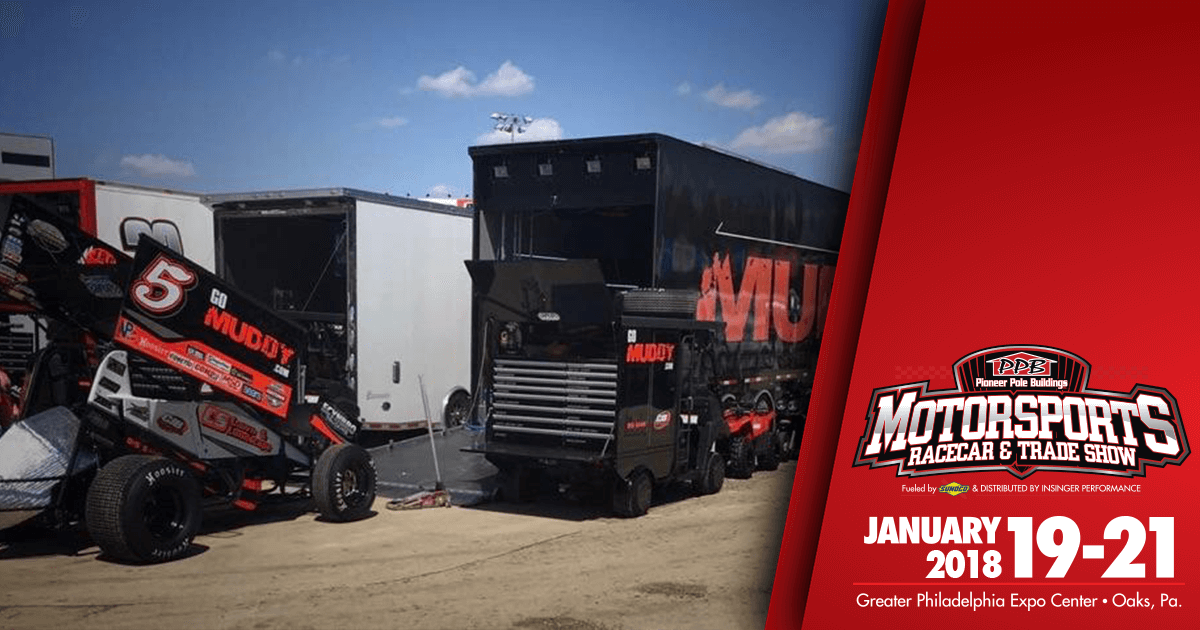 OAKS, PA December 28, 2017 . . . David Gravel’s Sprint car racing season went from very good to outstanding in 2017. The rising star of the World of Outlaws Craftsman Sprint Car Series kicked off his season with a win in the Arctic Cat All Star Circuit of Champions Sprint car race at Volusia Speedway Park in Barbourville, Florida and then closed it out with a huge win in the in the Textron Off Road World of Outlaws World Finals at the Dirt Track in Charlotte.

Gravel and his CJB Motorsports team, owned by Chad and Jenn Clemens, will part of the Pioneer Pole Buildings Motorsports 2018 Racecar and Trade Show Presented by Sunoco and Fueled by Insinger Performance at the Greater Philadelphia Expo Center in Oaks, PA January 19-21.

The win at Charlotte put Gravel third in the final World of Outlaw standings. Overall during the season he won 18 WoO features and a total of 20 features. The Connecticut racer, a fast rising star in Sprint car racing, earned 72 top-10 finishes out of 86 races entered. He led a total of 421 laps.

One of the team’s rare disappointments came on Sprint Car racing’s biggest stage. While leading this year’s $150,000 to win Knoxville (Iowa) Nationals the motor blew. The team rebounded quickly by winning the Williams Grove (PA) Speedway National Open to pocket $50,000.

“We obviously still have the goals of winning an Outlaws championship, a Knoxville Nationals title and a Kings Royal. We have identified areas where we can do better,” said Gravel recently

Unique will be the opportunity for show attendees to meet Gravel on Saturday afternoon and collect an autograph while hearing him talk about his great season and plans for 2018 in a casual setting near the team display. CJB Motorsports will have one of their new GoMuddy.com. Big Game Treestands sponsored No. 5 410 Sprint Cars and their hauler on display and will be open for tours. The team will be debuting a new sponsor, Wiekert’s Livestock, who will join C&S Lawn & Landscape, Nyce Crete and Landis Block and Concrete, Bair’s Tree Service, J.R.C. Transportation and Ecynbro Trucking on his year’s race cars.

Gravel, the top 2017 Northeast driver in open cockpit racing, will also be part of a group autograph session at 5 p.m. at the Area Auto Racing News display. Drivers will be signing a special full-color poster depicting all the top divisional winners during the season that will be given away only at the show.

Top winners that are scheduled to be part of the signing include Sheppard who won 41 events, Matt Hirschman (tops in Asphalt Modified wins with 17), Mike Sweeney (winner of 10 Asphalt Late Model victories) and Tyler Warren (top winner in 600 Micro Sprints with 16).

More than 250 racing vehicles and booth displays will make up the three day show that fills 250,000 square feet of show space.

The show opens on Friday, January 19th at 2 p.m. and closes at 9. Doors open on Saturday and Sunday at 11 a.m. The box office and D-Hall exhibit area opens one hour earlier each day.

Check out www.motorsportstradeshow.com or call 609-888-3618 for further information.