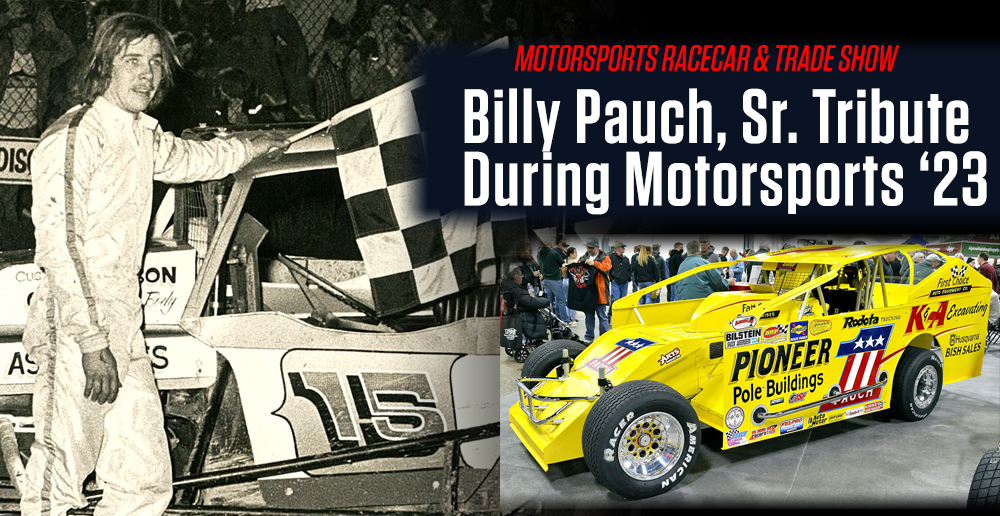 Oaks, PA – Billy Pauch, Sr., whose time behind the wheel of race cars has spanned six decades with nearly 750 career feature victories, will be in the spotlight at the Pioneer Pole Buildings Motorsports 2023 Show.

A celebration of  the career of “Billy The Kid” will be among the featured attractions and displays at the 37th annual Race  Car & Trade Show which takes place at the Greater Philadelphia Expo Center, Oaks, PA., on Friday and Saturday, January 21-22, 2023.

The Hall of Fame driver was most noted for his accomplishments in dirt Modified and Sprint Car competition. He did, however, shine on pavement as well. His upset victory in the Race of Champions at the then paved Flemington Fairgrounds were among his many achievements and he also made several starts on the NASCAR Truck series.

Pauch will be available during the show for autographs, pose for photos and sign copies of the recently released book, “THE LAST COWBOY: The Life and Times of Billy Pauch” which will be available for sale. Fans will also have the opportunity to reminisce with Pauch during the Show as well as join him and several of his competitors on a Stage Show where questions will be taken from the audience.

The many car owners that Pauch drove for during his 47 years are invited to be included in the celebration. Several of the cars Pauch drove to victory during his career are expected to be the backbone of a lavish exhibit that will also include a 40 foot picture wall of photos from his career.

Exhibit space is selling quickly and an early sell-out is expected. Those interested should contact show manager Dan Sammons at 609-888-3618 or  danny@aarn.com.  The show layout will return to the same design used since the show moved to the Oaks, PA expo center.

Show hours will run 2-9 p.m. on Friday and 11 a.m. to 8 p.m. on Saturday. The show will again include the Aqua-Duck Water Transport sponsored Ms. Motorsports pageant on Friday night just prior to the show closing at 8 PM with this year’s winner receiving $2,500!  Applications are available on the show web-site.

The annual RAACE Foundation sponsored Big-Wheel races, not held last year because of Covid, will return to the schedule on Saturday afternoon. Big Wheels are supplied, no pre-registration is needed, and top three in each age group will receive trophies.

The announcement of other special exhibits, autograph guests and seminars will be announcement in the coming weeks. Hotel rooms and other show information is available at www.motorsportstradeshow.com or by calling the show office at 609-888-3618