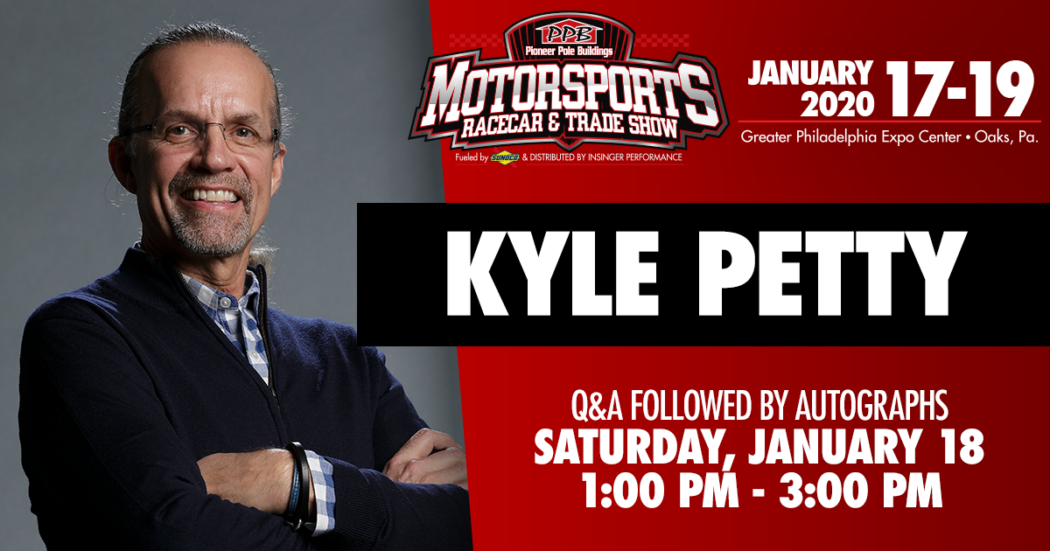 The son of seven time NASCAR Cup champion Richard Petty, now a popular NBC Sports racing analyst, will chat with show attendees and answer questions on Saturday afternoon of the show followed by a two hour autograph session running from 1 p.m. to 3 p.m.

Kyle was an eight time winner in NASCAR Cup competition. He appeared in 829 races, finished in the top five in the NASCAR standings five times. He earned 173 top ten finishes.

In addition, Petty is acclaimed for his long history of philanthropic efforts. For 26 years, Petty has led the Kyle Petty Charity Ride Across America, an annual cross-country motorcycle ride that raises funds and awareness for Victory Junction – a camp dedicated to providing enriching experiences for children with chronic and serious medical illnesses. The Camp was created by Petty and his family in honor of his late son, Adam Petty. To date, the Ride has raised more than $19 million for Victory Junction and other children’s hospitals, and is the most successful philanthropic event staged by any person in the NASCAR family.

The Motorsports show, which is celebrating its 36th year, attracts just about everything imaginable in motorsports filling 250,000 square feet of the Expo Center.

The display will feature an Orange County “Past, Present and Future” theme. Included will be the Behrent’s No. 3 dirt Modified which was driven to victory in the historical $100,000 to win Centennial race by Mat Williamson.

Brett Hearn’s Madsen Overhead Door No. 20, driven in the 2019 Eastern States 200, will also be on display. Hearn has since announced his semi-retirement from driving after earning more than 900 career victories and the 2019 Orange County Modified title.

Many Modifieds along with other divisions that have raced at Orange County over the years will be on display along with special exhibits.

Many drivers who have competed at the popular track during the last 100 years will be on hand to sign autographs on Friday night and Saturday afternoon.

One of the most popular events during the three day show has been, and will again be, the Ms. Motorsports Pageant sponsored by Aqua Duck Water Transport.  One woman will walk off with a $1,500 cash prize along with a poster deal.

Many racing facilities and sanctioning bodies will be represented, using the show to announce their 2020 racing plans and schedules. The show will include over 200 race cars of all kinds.

Hotel rooms are available at the nearby Valley Forge Casino Resort at the special show rate of $91 per night. Call 610.354.8118 and be sure to ask for the Motorsports Show Room Block in the Valley Tower.

On Sunday, all children 12 and under are admitted FREE with a parent. A Little Miss pageant will be held as well as Big Wheel races.

Tickets are available daily at the door one hour before the show opens. To stay informed on the latest show news to obtain booth information or enter one of the competitions, check in at www.motorsportstradeshow.com or call 609-888-3618.