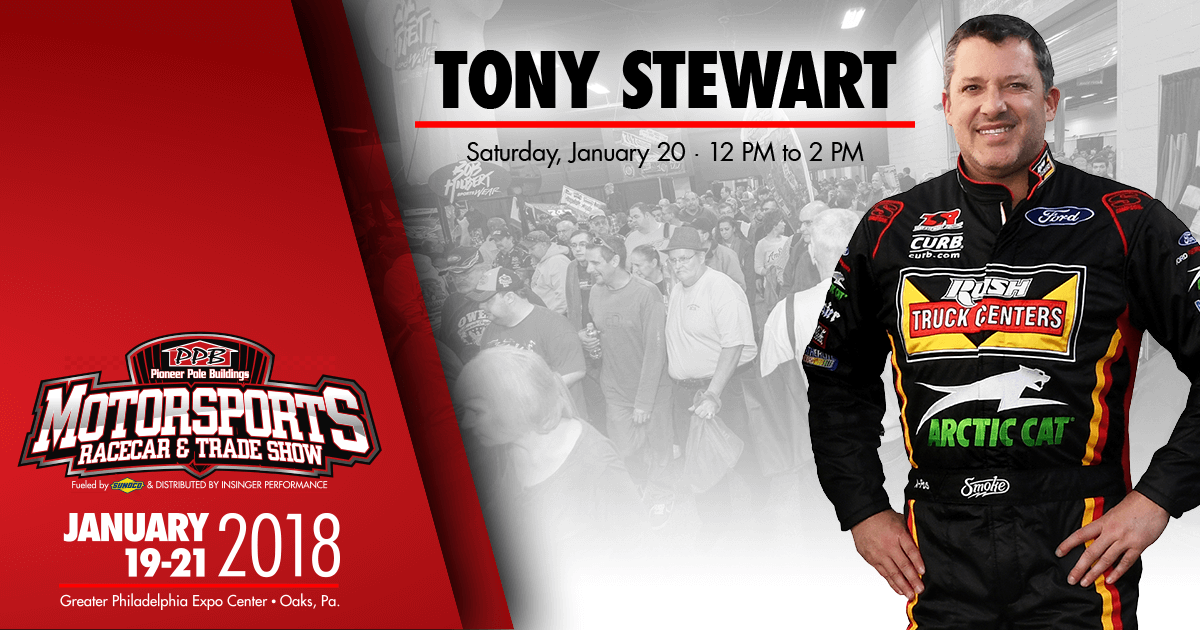 Oaks, PA — Tony Stewart, one of the most popular names in auto racing, is set to be part of the Pioneer Pole Buildings Motorsports 2018 Race Car and Trade Show presented by Sunoco and fueled by Insinger Performance come January 2018.

A winner in just about every form of auto racing that he took part in, including NASCAR Cup and IndyCar, during his career Stewart will appear at the popular show on Saturday, January 20, from 12 noon to 2 p.m. The 33rd edition of the show, featuring just about everything imaginable in motorsports, takes place at the Greater Philadelphia Expo Center in Oaks, Pa. on Friday through Sunday, January 19-21, 2018.

Stewart, a three-time NASCAR Cup Series champion, retired from NASCAR race driving at the end of the 2016 season. He remains a major part of NASCAR as he and Gene Haas own the four car Stewart-Haas Cup Series team. The Ford entries are currently driven by Kevin Harvick, Kurt Busch, Clint Bowyer and Danica Patrick.

Considered one of the busiest people in the motorsports business Tony now races in Sprint Car events across the nation, operates the hugely popular Eldora, Ohio Speedway and is the owner of the All Star Circuit of Champions Sprint Car organization not to mention a number of other business ventures.

The former NASCAR, Indy Racing League, USAC Triple Crown and IROC champion is always a great interview. He will first speak to show attendees before signing autographs.
Many other well-known local, regional and national motorsports personalities are also expected to appear.

Filling 250,000 square feet of space, the show features hundreds of race cars, speedway exhibits, parts and product displays and more. Many speedways use the three day show to announce their plans for the new season. In addition, there are a number of free seminars offered that cover a variety of subjects relating to the business of motorsports.

The show has also become known for its outstanding show special cash and carry prices on many items especially a long range of safety equipment from seats, to helmets and uniforms.

“The Greater Philadelphia Expo Center in Oaks is a great location in the center of the northeast racing world,” said Sammons. “It’s easy in and easy out with plenty of free parking surrounding the Greater Philadelphia Expo Center. It has become a very popular location with show attendees and exhibitors. We welcome the opportunity to return the show to the Expo Center which continues to improve annually. The new HD Lights were a great addition last year.”

Exhibit space continues to fill quickly indicating the show will be a huge success.

A newly designed website with up to date information on the show was recently launched, motorsportstradeshow.com. The site is dedicated solely to the event and will be a must visit for potential exhibitors and attendees.

Information is also available by calling 609.888.3618 or emailing a request to motorsports@aarn.com.